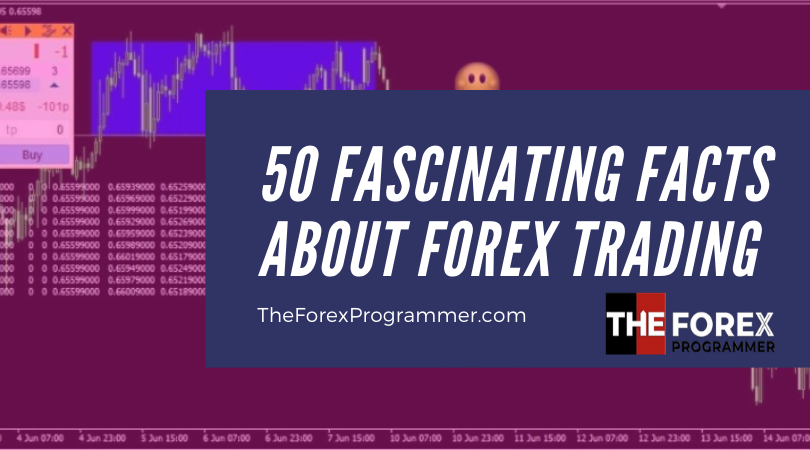 Think you know all there is to know about Forex and currencies? Think again! I’ve got for you in this post 50 interesting facts about Forex trading.

If you’ve gone through my introductory guide on Foreign exchange trading, you’ll agree with me that this is the biggest financial currency trading market in the world.

But what is it’s origin? How did it become so widespread today? How much does the transaction per day in the Forex market translate to? Learn more in this quick post.

Not many people are aware that Forex trading dates back to ancient times. The first currency transaction can be traced back to the Talmudic writings. Money changers were people who used to help others change their currency, while taking a commission for their services.

Did you know that the GBP/USD currency pair is known as the Cable in the forex market? Amused? The reason why the pair is called the Cable is that before the advent of satellites and fibre optics, the London and New York Stock Exchanges were connected via a giant steel cable that ran under the Atlantic.

Another interesting fact about Forex is the way the traders are categorised. Traders are categorised into bulls – or those who are optimistic and believe the market will go up – and bears – the downbeat ones, expecting the markets to fall. The names are derived from the fact that a bull strikes upwards and a bear swipes downwards.

1. China created the first paper money in the world, some 1400 years ago!
2. Up to World War II, tea was used a form of currency in Asia, spanning countries such as China, Tibet, Mongolia and Central Asia
3. The word dollar finds its origins in the world thaler from Eastern Europe. Silver coins were called as thalers and used widely in Europe between 16th and 19th century. The thaler transformed to the dollar.
4. The British pound sterling is the world’s oldest currency that is still in use today
5. Almost every trader knows that a $1 Canadian coin is known as the loonie
6. But did you know that a $2 Canadian coin is known as the toonie?
7. The French franc dates back to as early as the 1300’s
8. $100,000. This was the largest denomination bill ever printed in the US, in 1934. The US Bureau of Engraving and Printing issues $100,000 gold certificate bills for use by the Federal reserve banks in order to transfer funds between themselves. It was not available for public use
9. Montenegro, Kosovo, Vatican City, Monaco, San Marino and Andorra are countries that are outside of the eurozone but use the euro as their national currency
10. SDR (special drawing rights) is the special currency used by the IMF (International Monetary Fund). The SDR’s are issued to nations directly and cannot be used by the general public
11. Israel replaced the shekel with ‘new shekel’ in 1980’s as inflation eroded the old shekel. At the time, the new shekel was worth 1000 ‘old’ shekels, introduced in 1986.
12. Jamaica’s currency is known as the dollar, but it is different from the US dollar.
13. The world’s highest denominated currency was issued by Hungary after WW-II. The country printed a bill worth 100 quintillion pengo. (Pengo was the currency of Hungary between 1927 – 1946). A hundred quintillion = 100,000,000,000,000,000,000
14. More than 66% of US cash is held overseas by foreign governments, individuals and institutions
15. There is more Monopoly Money created every year than real money
16. North Korea is the largest counterfeiter of the US dollar currency
17. In 1998, when Philippines issued the 100,000 peso bank note, it was as large as a sheet of legal paper, making it the largest paper currency in size ever issued in terms of its size
18. The Japanese yen and the Chinese yuan (or renminbi) has the same currency symbol
19. Zloty, the currency in Poland, means gold when translated to English
20. Pocahontas appeared on the back of a $20 US bill in 1980’s
21. The cable is the slang used by forex traders for the GBPUSD currency pair. The slang originated when GBP and USD exchange rates began to be relayed by a communications cable under the Atlantic
22. The Chunnel, refers to the EURGBP and comes from the English Channel which connects Europe to Great Britain
23. Barnie, refers to the USDRUB currency pair
24. Greenback, is another name for the US dollar as the paper notes issued during the American civil war carried a distinctive green color
25. The Buck, is another slang for the US dollar and its origins come from native Americans or American Indians who used to trade the buck (male deer) for US dollars
26. The British pound sterling derives its name due to the fact that at one point in time, the British pound had a value of one pound of sterling silver
27. The terminology in Candlestick charts employs extensive military terminology, reflecting the tumultuous era in Japan where regional feudal war lords were constantly at war with each other
28. The Dojima Rice Exchange was established in 1600’s in Japan with over 1300 rice dealers. At one point, rice became the medium of exchange in Japan
29. The Dojima Rice Exchange is also the world’s first futures exchange
30. Munehisa Homna is widely attributed to as the father of the candlestick charts
31. While Candlestick charts were widely used in Japan for over 100’s of years, it was only brought to the West just 25 years ago
32. Steve Nison is attributed to have brought Japanese Candlestick charts to the West
33. The Bank for International Settlements (BIS) is owned by central banks and is known as a “bank for central banks”
34. The word money, monetary comes from the Roman goddess of marriage and women, Juno Moneta
35. The first metal money was used by the Sumerians who used ingots
36. The US secret service was originally created during the civil war to fight counterfeit money
37. There are two ATMs in Antarctica. This definitely fits into our list of Forex trading facts
38. There are only three ways a government can get money. Print it, borrow it, collect taxes
39. There are over 170 different currencies around the world today
40. The Peso, means “weight” in Spanish or pieces of eight when translated to English.
41. Fiat money, which we use today is the money that is not backed by gold. The name fiat comes from Latin, known as “let it be done”
42. The dollar was officially adopted by the US as its unit of currency in 1785
43. The euro currency began to be used electronically in January 1999. It later entered general circulation in January 2002
44. The volume of retail Forex trading represents just 5.5% of the whole foreign exchange market
45. It was the Bretton Woods agreement that gave way to Forex trading. Prior to 1971, speculation in currency markets was not permitted
46. London is the largest Forex hub in the world, followed by New York and then Singapore.
47. Alex. Brown & Sons was the first investment bank in the United States, founded in 1800 and is known to be one of the pioneers of Forex trading. The firm was later acquired by Deutsche Bank which later sold the division to Raymond James
48. Deutsche Bank is the world’s largest foreign exchange dealer with over 21% in market share
49. More than 85% of the global Forex market transactions happens on only 7 currency pairs known as the majors (EURUSD, USDJPY, GBPUSD, AUDUSD, NZDUSD, USDCAD, USDCHF)
50. The US dollar is involved in almost 90% of the global Forex transaction. Not surprising that it is also the world’s reserve currency.

51. The volume of trading in Forex markets stands at more than $5 trillion a day, much more than the volume on the New York Stock Exchange.

52. Also, the most traded currency is the US dollar, which features in nearly 80% of all Forex trades.

54. Immediate exchange of currencies is called spot trading, since the exchange takes place “on the spot.”

55. Forex trading was once only possible for banks and institutions with at least $40 million to $60 million in liquid funds. Today, people with a much smaller sum can engage in Forex trading.

56. Most people think that the US is the center of Forex trading, since maximum transactions involve the US dollar. That is not true. In reality, 41% of all Forex transactions occur in the UK, with only 19% taking place in the US. So, the London Stock Exchange is the trading hub for Forex deals.

Did you find this facts about Forex trading to be insightful? Let me know what you think in the comment box below.